Welcome to the October 2015 edition of Righting Crime Fiction. This month, I’m continuing with the “Writer’s Guide to Fighting” series and moving into strikes. Authors will probably find the section on strikes, which will cover quite a number of lessons and span many months, the most relevant. This is where I’ll describe how to execute different strikes and provide the correct names for each. When it comes to fight scenes in fiction, this is where I see the most mistakes. An author might have a character knock another character unconscious with a jab or have a right-handed character deliver a left cross. While these are not “fatal” errors, readers with fight experience will recognize the lack of research and might mention it negatively in a review.

Speaking of the jab, it’s the strike I’ll highlight this month. While I’ll be speaking to your “cop” characters, these techniques are not unique to law enforcement, so any of your characters can use them. As an example, if you’re writing a romance, your protagonist could shoot a jab to the nose of your antagonist, snapping his head back and causing blood to spill from his nostrils.

LEFT JAB (to the head)

The jab is a quick, snapping punch that is executed with the lead hand. The lead hand is the left hand for right-handed fighters, and the right hand for left-handed fighter. Since your lead hand is closest to the suspect, the jab will connect at a higher rate than other punches. The jab can be used to distract an aggressive suspect, to set up follow-up punches, and can even be used defensively to disrupt a suspect’s attack. If developed properly and delivered correctly, it can be a very effective punch in your bag of striking tricks.

While it is not a power punch, a stiff jab to the face can potentially snap a suspect’s head back and stun him. This could be enough to cause some suspects to discontinue their aggressive behavior, but this will be the exception and not the norm. You should always be prepared to execute follow-up strikes after a jab, and these strikes should be delivered immediately and explosively—before the suspect has time to uncross his eyes and clear his head.

Step One:  For maximum power, from the Fighting Stance (see Fig. 2.1) utilize a Front Step while quickly extending your left fist forward in a straight line from your chin toward the target (see Fig. 2.2). Do not lift your left elbow away from your body as your arm unfolds into the punch, because this will detract from your power and speed of delivery. Your elbow should travel directly upward as your arm extends. 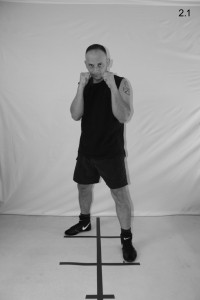 Step Two:  As your left fist nears the end of the extension (approximately the last six inches of the punch), rotate your left hand sharply over in a clockwise direction so that your palm is facing the floor and your fist is at an approximate forty-five degree angle at the end of the punch, while completing the Front Step by bringing your rear leg forward (see Fig. 2.3). The rotating motion of your fist will roll your left shoulder over so that the ball of your shoulder shields your chin. This shielding of the chin will provide protection against a counter right hand. Additionally, rotating your fist to a forty-five degree angle will ensure that you strike with the large knuckles of the index and middle fingers.

Step Three: As quickly and explosively as you executed the Jab, pull your fist back toward your chin (see Fig. 2.4) and return to the Fighting Stance (see Fig. 2.5). 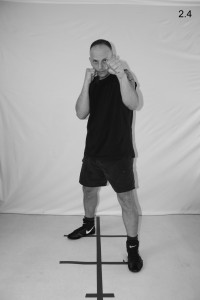 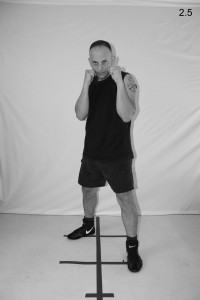 LEFT JAB (to the body)

Executing the left jab to your suspect’s body can be an effective set up punch. It can draw your suspect’s hands down, thereby creating an opening for a strike to the head. When executed to the solar plexus, it can cause some suspects to discontinue their aggressive behavior and sink to the ground, because this is a highly sensitive area for most folks.

Step One:  Dip your body quickly by bending at the knees. The dipping motion will lower your body and, depending on your height versus the suspect’s height, place your shoulders more in line with his torso.

Well, that wraps up the October 2015 segment of Righting Crime Fiction. If any of you have any questions or comments or suggested topics, feel free to contact me at rightingcrimefiction@gmail.com and I will reply as soon as I can.

Until next time, write, rewrite, and get it right!

Despite what you’ve seen in books, TV, and the movies, the role of law enforcement leaders is to lead.

In addition to the mistake I covered in the last entry (leaders as doer bees), another common mistake is to depict leaders strictly as managers (and poor ones at that). What’s the difference between leaders and managers? Well, to paraphrase Norman Schwarzkopf, you manage a business, but you lead people. In any human endeavor, a leader must recognize those elements of management (say, balancing a budget) and of leadership (dealing with people). A true leader sees each of his followers as an individual and understands that each of those individuals has his/her own hopes, dreams, fears, and desires.

In police fiction, though, most police leaders are shown as managerial tyrants with a one-dimensional concern for the outcome, at any cost. We see heroes berated for not solving a case quickly enough, or in particularly unethical instances, doing too good of a job and getting too close to an uncomfortable truth, a corruption of the system that the leader is invested in protecting. In either extreme, the leader is an obstacle to the officer or detective.

These two frequent clichés probably became clichés the same way all clichés are born – because some vestige of truth existed in them at some time in our collective history. Law enforcement is still busily chugging toward being recognized as a profession in the same fashion as the medical or legal fields. We have a ways to go, certainly, but we’ve also come miles and miles from a sometimes dirty past. A bellowing leader haranguing a poor detective is the least of our sins, and so it is an image that is reluctant to die.

But is it accurate?

Not very, at least not anymore.

Do police leaders ask for, even demand, accountability? Absolutely. But not in the bombastic way often shown on page or screen. Most police leaders are far more congenial than that. Most recognize the need for a good relationship with their followers. The scenes we read about or see in TV or movies are focused on a snapshot in time. Police work in real life is an ongoing process. There will be always be another call or another case after this one. And since we already know that it won’t be the leader who does the work to handle that call or case, who will it be?

The officer or detective, of course. The leader needs them to do the work. And people don’t like it when you yell at them all the time. It doesn’t work over the long haul. Look at any professional sports coach who was a yeller. Sooner or later, they lose the ear of the locker room, and their influence diminishes (and with it, the performance of the team, incidentally).

I don’t mean to say that there isn’t the occasional butt-chewing. What I’m saying is that it is the exception, not the rule. Good leaders don’t routinely call the men and women they lead into their office to yell at them. They do something really radical instead. They talk to them.

Can you make that work in your book? I’m betting so.

Despite what you’ve seen in books, TV, and the movies, the role of law enforcement leaders is to lead. I know that sounds like a simple, no-duh statement, but if you stop and think about it, that role isn’t the one most often depicted in fiction. Instead, police leaders are shown as high ranking workers or as managers.

In real life, the delivery of law enforcement services is provided most directly by either patrol officers or by detectives, depending on the nature of the service needed. Think about it. When you call 911 because someone is breaking into your house, who shows up first? Patrol officers. A leader may show up after to deal with the situation, or lead it, but unless that leader happens to be the closest unit to the scene, s/he won’t be the first responder.

Detective work is no different, though the misuse of rank is even more prevalent. Whether a burglary or a homicide, case work is completed by detectives, not by leaders. The detective is the one who interviews witnesses, examines evidence (although not all of it – technicians do some of that), interrogates suspects, and so forth.

And yet, we routinely see characters at the rank of sergeant or lieutenant doing case work. The classic buddy cop film series, Lethal Weapon, even promotes its heroes to captain while they’re still out there doing service delivery!

Why do writers do this? Frankly, without conducting a poll, I can’t answer for sure. Some of it may have to do with an unfamiliarity with the rank structure and duties associated with the different ranks. Or perhaps because they believe that giving a character a higher rank imbues him with more gravitas. Either way, it’s largely inaccurate.

On some larger departments, of course, you may still find some “worker bees” at the sergeant level, particularly in the investigate positions. But by and large, when someone promotes to sergeant, her job just became one of leadership, not service delivery.

What does that mean? Well, I will cover that in a future entry, but an analogy might be found in sports. Since football is arguably (and unfortunately) our nation’s most popular sport, let’s use that. Once promoted, a leader is less like the players on the field, and more like the coach on the sidelines. Her job is both to guide or direct the players on the field and to make sure they have the resources to accomplish the organizational goals.

It isn’t to run the ball.

Coming back to police fiction, it’s the leader’s job to guide everything from a radio call (or a case) to the direction of the department, as well as make sure the men and women trying to accomplish that have the resources they need to do it.

It isn’t to slap cuffs on a perp.

So if your hero needs to chase bad guys in cars, or on foot over fences and through alleys, and to pull out the bracelets and hook up that bad guy…don’t make her a leader. Make her an officer or a detective. Or at the very least, please make it clear why she is an anomaly.

That could work, right?